The diagnosis is not good today. The spots in my left eye have increased and some have migrated to the right eye. More scrappings were done but not with a syringe this time.  It looked something like this:

I watched this blade move about on my cornea trying to ‘gather’ all the invisible spots and it triggered my floodgates to open again.

Dr Hotcakes said that my condiiton is rare and I’m started on a new course of medication and eyedrops.
I will have to return to NUH again on Monday to see how I’m reacting to it.

13 dogs have been mercilessly massacred in a house at Seremban, Malaysia!

Armed with a court order, law enforcers demanded to be let into the private house. Mr Eng scrambled out through the back door with 4 of his dogs in tow, and drove away in his car while his sister tried to protect the other dogs. Unfortunately, she was dragged away when the law enforcers barge into the house and started the bloodshed.

The dogs were herded into a corner and shot. None were spared.

The dogs had scuttled throughout the house to escape the gunfire, their flights of terror marked by a trail of feces…

What is the world coming to? What did the dogs do that warrant such brutalities? Do they need to resort to such extreme methods? Couldn’t they send the dogs to the SPCA or at least put them down humanely? Don’t they have a conscience?  Can they even sleep at night?

I hope the barbarians would be plagued by nightmares and the bloodied image above will be etched forever in their minds. 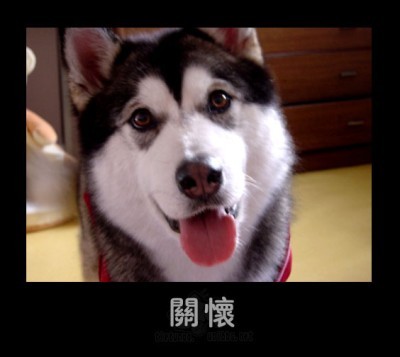 Today, I went back to the Eye Centre for the results of my scrapping tests. The center was very crowded and I waited for quite a while.

Dr Hotcakes did a quick check on my eye and I was free to go in less than 5 minutes.

When I tried telling him how painful my eye was and my tearing has worsen after the check-up on Saturday, he didn’t seem interested to hear all that. Isn’t the responsibility of a doctor to listen to a patients’ complaints to find out more symptoms towards the ailment? I do not know what are the exact guidelines that a doctor should adhere to during consultation but at least for me, that is my expectations as a patient for my doctor to explain everything clearly to me.

Throughout the whole thing, he didn’t mention anything regarding my test results. It was only after my persistent questioning that he revealed the results wasn’t out – yet. I was thinking, they could have given me a call to postpone the appointment instead of making me go all the way there, waited for a few hours and in the end, tell me that the results wasn’t out yet. It’s a waste of time, isn’t it?

I know these sort of tests takes time but all they need to do was just to give me a call. Am I being unreasonable?

During Saturday, they were making such a big hoo-ha about my condition to the point that almost all the doctors in the Eye Centre came over to take turns to examine my eye like I’m some freak-eye-monster who’s going to start a global epidemic yet now, my follow-up was like so fucked-up?

On the evening of 22 June 2006, I was referred to the A & E Department of NUH by my family doctor for a eye condition.

After treatment, I was getting ready to make my payment but what greeted me from behind the counter was a well-dressed Customer Service Associate (CSA) who probably had a very lousy day as tiredness and frustration were written all over her face.

I handed over to her my ATM card with both hands but she just grab it over with one hand, without eye contact, no greeting, no nothing.

These may seem insignificant to some but to others, these three little actions reveal just exactly how far the CSA is willing to serve you.

I understand that CSA worked long hours and may inevitably run into nasty patients (read: customers) but it’s part and parcel of their job. They should show professionalism by not showing a face to a customer despite how bad their day has been.

As a patient, I felt very depressed by the services of this CSA. Although my physical needs have been tended to, my emotional needs are not met.

Having a worrying eye condition is bad enough yet to be treated like someone who probably can’t even afford the $70 consultation fees is the last thing I need. (At least that’s the message I got from her body language)

As a front line personnel, CSAs are among the very first representative from NUH that patients come into contact with and first impressions are always very important as it can make or break a long lasting relationship between the patient and NUH.

Were the training received inadequate? I guessed it’s high time NUH reviewed its training system for its CSAs. Perhaps NUH could consider engaging the services of Mr Ron Kaufman to improve the customer service for all its CSAs like what Alexandra Hospital is doing?

Medical services does not come cheap here in Singapore hence patients would expect much better services than this.

I believe for Singapore to remain competitively as a medical hub in the region, we need not just well-trained physicians. We also need caring and friendly CSA s around to complete that professional touch.

My left eye was very itchy and has been tearing non-stop since yesterday. I went to Bukit Batok to see Dr Chua and he dripped some yellow liquid into my eyes. He switched off the lights and shone a torchlight into my eyes.

Immediately, he yelled to his nurse outside, “XX, COME SEE THIS!!”

The nurse immediately rushed in and stood beside him.

I reached the A&E Department at NUH around 7pm and after waiting for nearly 5 hours, I finally got to see the doctor at close to midnight. The doctor that attended to me was Dr Lim, probably a freshman out of medical school. She began checking my eyes with this equipment found at all optical shops. Blinding lights were repeatively shone into my already painful eyes and I was told to keep them “opened” and “look straight”.

The same yellow liquid test was performed on me again yielding the same results as Dr Chua. She proceeded to numb my eyes with a few drops of anesthetic and proceeded to perform scrapping test for my eyes. Scrapping test is done by collecting samples from my eyes and sending these for laboratories testing to determine what was causing my condition. The instrument used to collect these samples was a syringe with a bent needle!

You have absolutely no idea how frightening it was to see that needle sliding across my eyeball trying to ‘catch’ invisible things! I didn’t dare to breathe too hard fearing the syringe would poke into my eye. To make matter worse, I have to go through that trauma four times as Dr Lim had to send in four separate samples.

By the time Dr Lim was done with my (eye) balls, it was close to 2AM and I had to return the following morning at 8AM for further testing!


This entry was posted in Uncategorized.

Very soon, my smile would be greeting the delegates from IMF and World Bank.

Sent in your megawatt smile here.

Don’t you wish the World Cup was like this?

Don’t you love the way they play?

Oooooooh…
Come on, I know you do, Jfree!

prevent papaya from dropping onto the ground?

Where got dirty?? Papaya only what!

kindness to animals taught from young

I was cleaning the rabbits cage today and left them in the playpen outside the corridor when the neighbour’s kids came over to watch them play. The 3 children are quite young, with the youngest boy being around one year plus, the oldest sister about 4 and the second sister somewhere in between.

Their mother were keeping watch from their door and smiling back at us all the time.
I’m pleased to say that I had very kind and understanding Muslim neighbors. In the past, whenever Dexter and I run into them along the corridor, I would always carry him up in my arms and let them have the right of way first.

I believe they were quite appreciative of this simple gesture and in return, they had always been quite tolerant towards us especially since Dexter was a dog.
All along, I’ve always been trying to foster good relations with my Muslim neighbors so as to pave the way for the future should I be ready to keep more dogs again.

I have always stood by the philosophy of Mr Ghandhi and his philosophy:

I believed that children should be nurtured at an early age with the mindset that all life forms should be treated with due respect and if they were to grow up as responsible and compassionate adults, education the only way.

Hence, I offered each of them a little stool to sit on and play with the rabbits while I try to teach them the proper ways to feed and handle rabbits.
Never mind if they didn’t understand what I’m saying but on my part, I hope I have achieved a small step towards the Great Nation that Mr Ghandhi has been talking about.

As I watched them play with the rabbits, I gave them some chye sim and encouraged them to feed the rabbits. Then, something struck me. Recently, I have discovered a mysterious trail of leaves placed neatly along each step of the stairs leading all the way up to my level.
Initially, I have thought nothing about it but the thing was that, the very same kind of leaves has been appearing inside my rabbits?cage!

I have no idea where the leaves came from or who had placed them inside the rabbits?cage? As the rabbits?cage was placed quite near to my main door, anyone could have just thrown the leaves in.
Luckily, my rabbits were kind of yim chim (picky) and very selective when it comes to eating greens. They hated carrots, loved apples, so-so with pineapples, and they preferred leaves to stems.
If you gave them something they didn’t like, they would simply throw their nose up in the air and turn their butt towards you!

So, after a series of chicken and duck talk, I came to the following conclusion that they were the ones who had fed the leaves to the rabbits. Horrors of horror, this explains why my dad’s pots of ??? have gone quite bald! But children being children, I wasn’t mad at them because what they needed are guidance. I explained to them that not all types of leaves/plants/vegetables are safe for rabbits. Some may be toxic and even kill the rabbits instead!

Judging from their expression, I knew that they didn’t really understand wehat I was saying.
So, I came up with this: