This is my Erhu, also known as the chinese violin/fiddle.

We first met way back in 1992, when I joined the school’s Chinese Orchestra. At that time, I didn’t know which ECA to join hence I did a monkey-see-monkey-do and followed my friends.

Through the years, we braved through many performances and SYF competitions together. From the school hall to Victoria Concert Hall and the Singapore Conference Hall, my Erhu has served me faithfully without fail.

Even when we went to Sarawak (Kuching Youth Chinese Orchestra) and Sabah (Chung Cheng High School), he has never left my side. 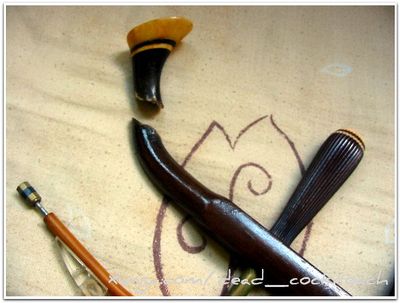 That is until today, my old friend has decided to bade me farewell for old age has finally taken it’s toll on him…

This is the ‘amplifier’ of the Erhu.

It is a hollow trunk with python skin attached on one side. Any notes played on the string is vibrated on this skin and the sound is projected out through the other end.

After so many years, the python skin has dehydrated and loses all it’s elasticity. As such, it is now no longer able to produce any sounds.

This, is my other good friend, the Zhongruan. 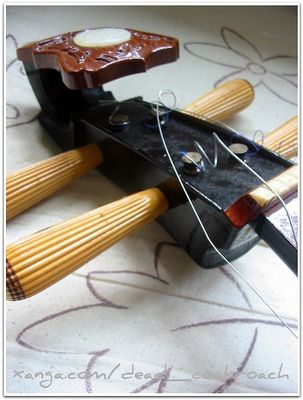 The Zhongruan was also known as the chinese guitar.

I didn’t had any formal training with the Zhongruan. I had always wanted to learn a different instrument when I was playing the Erhu but my instructor didn’t want me to stray away from the Strings section.

However, that didn’t stop me from pursuing my interest even after graduating from school. In 1999, I bought my Zhongruan from Karl Heng Enterprise at Bain Street.

At that time, I was already serving my National Service.

While other soldiers brought guitars into camp, I bought her along and figure out how to play on my own. 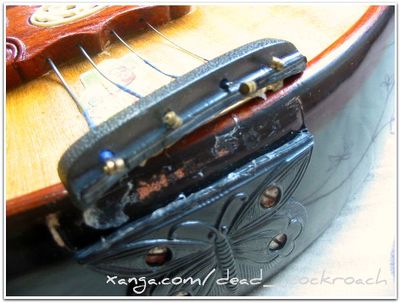 Somehow, the CSM from BRC got wind of it and he looked me up to perform for his department’s Mooncake Festival celebrations.

I remembered playing 十五的月亮 and I was awarded one long weekend for my 3 minutes performance.

Like my Erhu, my Zhongruan has accompanied me through my darkest moments
and I would never forsake them.

I will keep them by my side as a momento of our many years of friendship.

This entry was posted in Uncategorized and tagged chinese, xanga.

I just had the most terrifying haircut in my entire life!

I’m rather broke this month and can’t go to my usual salon so I went to the Malay barber near my house. The barber looked young, in his twenties with a goatee. He was rather huge and intimidating looking.

As I looked at him through the mirror, my mind started to wander.

“Is he a secret agent from Al Qaeda?”

“Could this barber shop be a false front for all their illegal activities?”

“Is there some secret passageway behind those walls where the important members are hiding and planning out their next big project – where to bomb and whom to target?”

Just then, another man came in and they started talking and laughing at the top of their lungs.

The barber was holding a shaver in his hands and turned his head to talk to the fella. All this while. his hand was holding the shaver which was waving frantically above my head!

I sink lower and lower into the seat…

My heart froze, literally! Will he decapitate me, just like how the Iraqis did with that American? Will I die an angonizing death, slow and painful or will he do it swiftly?

I prayed hard while my gaze became fixed at that fast moving blade above my head. My ordeal finally ended after 15 minutes which seemed like an eternity!

Thank goodness all my body parts except for my hair are still intact!

I believe the phrase ‘A Close Shave‘ applies to this situation very appropriately!

This entry was posted in Uncategorized and tagged al qaeda, barber, chinese, malay.

painting for the new year

My dad has been painting the house for the past two days in preparation for the Chinese New Year and its such hard work! The ceiling has been smoked yellow by the incense burning and years of neglect that the old paint is peeling off…

I on the other hand didn’t help around much except wipe the cabinets and walls in the kitchen of oil, grime and dirt. My arms ended up very tired and sore…

My brother bought a DVD player and I watched LOTR (The Fellowship Of The Ring) till 1.20am.

This entry was posted in Uncategorized and tagged chinese, new year, painting.